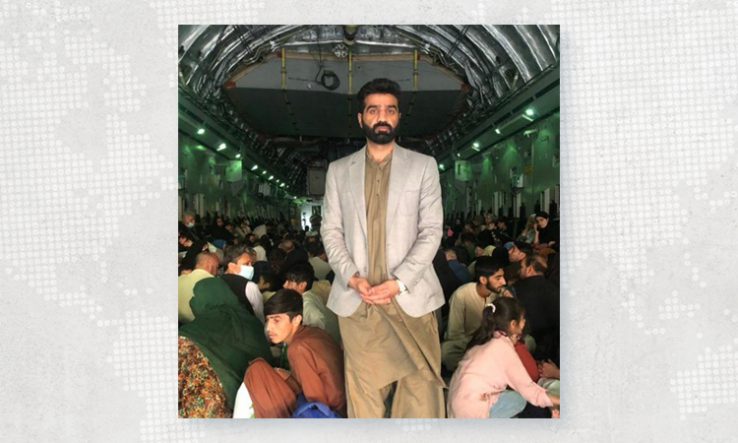 One year ago, the seizure of Kabul by the Taliban prompted a chaotic collapse of stability in Afghanistan. As the country’s government fell apart and Western troops withdrew, many thousands of citizens tried to flee the country.

Researchers, lecturers and students were among those who became refugees overnight. Naimat Zafary, a University of Sussex student and a member of the UK government-run Chevening scholarship programme, spoke to Research Professional News about his ordeal shortly after he escaped from Afghanistan with his family.

A year later, he looks back on a turbulent 12 months—and wonders what the future will bring.

For weeks now, my house has been a place of preparation and anticipation. After years of study, of working for agencies such as the UN and supporting my extended family, my own longed-for opportunity has come. I have been accepted to be a Chevening scholar in Britain.

I care deeply about the subject I plan to study—governance, development and public policy—and my life has given me clear sight of the struggles, hopes and dangers facing the poorest nations. The risks are many: corruption, failures of government, vested interests, conflict and policies not based on realities. But it always seems to me that the greatest danger is the lack of education, which means a people have little ability to scrutinise their own society.

Change has happened in parts, especially for women and girls who have learned to hope for a different life. I have helped my sister train as a doctor. Local students do their homework in my home library. But I want to be prepared to do more.

Then, though, the world changes. The Americans withdraw from Afghanistan without warning and the Taliban are approaching Kabul. And then the news—Afghan Chevening entry to the UK has been postponed and the opportunity is slipping away before my eyes. It is dangerous, but I have to act.

So, despite the concern of those who love me—in fact, because of it—I speak. I use what voice I have to reach into the Western media and social media. And my voice is heard.

Yet things only become more dangerous. The Taliban are approaching Kabul at speed, and nobody knows for how long it will be possible to leave the country. I visit British officials, trying to be as professional as possible. In the UK, my dear friends are using every channel they know to change the decision and to allow the Afghan Cheveners to travel.

And then the breakthrough. British prime minister Boris Johnson answers a question in a press conference and says we can come to the UK. We just have to make it to the airport.

After three days spent waiting in a hotel with other Chevening scholars, I gather my family and we begin the perilous journey from the outer edge of the airport to the boundary wall. The sights I saw during those two days will haunt my wife and me for the rest of our lives. A gun was held to me and I was threatened harshly. We were pushed back. But with my child on my shoulders and our more vulnerable family members held between our locked arms, we reached the boundary wall.

When the British soldier lifted us to safety, I hugged and kissed his shoulder. Then I texted my English friend to say we were safe. The plane lifted above Kabul and towards the UK.

But that was, of course, only the beginning of a story. I had meant to come to the UK as a student and scholar with a job and a life, a house and car and family around me. I could not have known what we were leaving and what would follow for those we left behind.

And so it began, our English life. Once we came out of a two-week hotel quarantine, we looked around the streets of London. I took my young children to the park and they noted the lack of gunfire. My wife and I talked at night. Summer became autumn and then winter. Was this now our home?

By now I was studying at the University of Sussex, travelling via train from the London asylum hotel, but I was seeking accommodation. Finally, the news came. A house had been found on the coast. We were overwhelmed with gratitude for the chance we had been offered.

Unlike their cousins back in Afghanistan, my daughters began school. Their teachers loved them and sometimes we walked to the pier for ice cream. That beach was a place of freedom and solace. On days when the weight of all that had happened was almost unbearable, the sea soaked up my tears.

But there was true friendship, too. Not only from my fellow Cheveners, every one of whom has a story and many of whom are not as fortunate as me to have their families safely with them, but also my course mates and teachers. I must single out Ceri Oeppen [University of Sussex lecturer], and of course my very close friend and lifetime mentor Ruth Arnold, who had worked to try to help us escape in the first place and who will be a beloved part of our family for life.

Since I joined the University of Sussex, I have offered my support in raising scholarship funds for others. I have settled in well and I have even joined a local cricket team.

On my desk, I have a framed Amazon receipt. It may seem a strange memento, but it includes the gift certificate that I was given for baby clothes and a buggy when I arrived in the UK. All my life, I have sought to help others. Now I have had the experience of being helped when I needed it most. I understand that the greatest bond between human beings is to learn from one another and to lift one another up. This is more than the kindness of strangers: it is the purpose of my education.

Looking to the future

What will come next? I am not sure. I have been accepted to study for a PhD at Sussex, a lifelong dream and something I hope will prepare me to put all my educational, professional and now personal experience to use serving others. I don’t want the tragedy of Afghanistan wasted. There are lessons to be learned and better routes to follow. My role is to have the twin authority of education and experience to make sure those lessons are not squandered.

I am determined to be ready to help ensure we do better. The cost of failure has been vast and terrible. What I learned during my master’s course about accountability, community engagement and resource distribution, which can actually help those in need and not feed corruption, must now make a difference.

Afghanistan is a warning. The good governance so disgracefully missing in my country, along with misspent aid, widened the gap between government and citizens. Now we see the consequences.

So, how do we approach the anniversary of my flight from Afghanistan and the fall of Kabul to the Taliban? It is hard to put into words what this means to us Cheveners, but anyone who has experienced loss knows the weight that accompanies the approach of a first anniversary. As it grows nearer, I walk each day again in my mind, only now I know what happens on the next day.

To be a Chevener is an honour, but it isn’t just for an individual. It is a call to service, something felt deeply by the remaining Chevening alumni waiting to come to the UK via the Afghan Citizens Resettlement Scheme and fearing what will happen until that day comes. Their fear is valid. I hope this wait will not be long.

But of course, I ask myself questions sometimes. When will I return to Afghanistan? When will my wife hold her parents? Might I walk freely down Kabul’s streets with my own daughters?

These questions are, for now, unanswerable. So instead, I will turn to those questions that I can answer.

What should I learn? What parts of my experience can I share? How can I help the millions of others across the globe who need education, transparency, good government and a share in the riches of the world?

Wherever I go, I take part of Afghanistan with me. I hope it is the best part and that one day I might, in some way I cannot yet imagine, give back to those who need what I have learned this year. What I have learned at great cost, yet surrounded by love and friendship.